Welcome to the Warhammer Fantasy Roleplay subreddit, a place to discuss roleplaying done in the Old World! Share with us the devious. This was mentioned on another thread as being an excellent WFRP scenario. I’ve never even heard of it. It’s not listed on the wikipedia. This an interesting project, A Private War is a significant bit of work, and I’ve long had a soft spot for the Markovite Ukase (just the fact it’s a.

Still in the original factory shrink wrap, with condition visible through shrink noted. 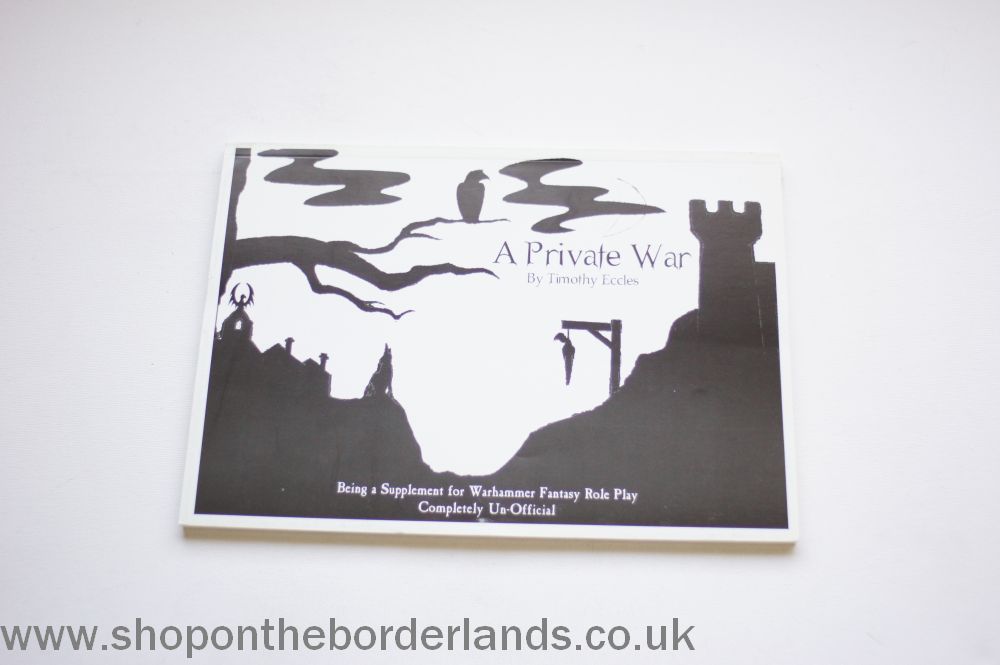 Wow, this really looks interesting. Anyway, just saw this and wanted to add my voice of support. Log in or sign up in seconds. I have actually used Solkan in a third edition campaign previously, so they have never been exorcised from my old world!

Did you play all the parts? Does it hold up? If excessively worn, they will be marked as “card worn. Fortunately I managed to find a complete pdf prifate the campaign here on Scribdand it should be freely accessible through the WHFRP Material sidebar if you’d like to take a look for yourself. If you have any questions about AutoModerator please respond to this comment and the Mods will get back to you!

I am starting to run the unofficial campaign from 1st edition in third. Simplified Rules In addition to site-wide rules we have the following specifics: May have flaws such as tears, pen marks or highlighting, large creases, stains, marks, a loose map, etc.

Warhammer Fantasy Roleplay Search In. How did you get involved? Private War, A Limited Edition. A “plus” sign indicates that an item is close to the next highest condition.

Posts are temporarily held for approval so we can make sure your post checks with our rules and is flaired correctly, you may be asked to remake your post if it lacks quality but most likely you’re good to go and within 12 hours your post wtrp be publicly viewable. Like new with only the slightest wear, many times indistinguishable from a Mint item.

Welcome to the Old World!

For example, “SW NM ” means shrink wrapped in near-mint condition. I own literally every thing for 3rd edition so finding closely related cards hasn’t been an issue thus far.

How are you handling the “very 1st Edition” stuff such as the Gods of Law? Extremely well used and has major flaws, which may be too numerous to mention. This seems to be something approaching legend by this point. Very well used, but complete and useable. What’s it actually like? Please contact the moderators of this subreddit if you have any questions or concerns. How did your character die, for example? It ended with a burning boat fill of children, half of Marienburg harbour going up in flames and the players on the run through the Wasteland.

Every item in our inventory has been inspected, very strictly graded, and bagged for its protection. It is gritty and down to earth rather than high fantasy so it depends on your preferences, the background is incredibly detailed. Thanks for drawing our attention to this campaign! If you visit the subreddit frequently we recommend you check out the Wiki.

It’s really a massive campaign, by the looks of it. May show very small spine creases or slight corner wear. Item is complete unless noted.

The cardboard backing of miniature packs is not graded. Become a Redditor and subscribe to one of thousands of communities.

I am a bot, and this action was performed automatically. This an interesting project, A Private War is a significant bit of work, and I’ve long had a soft spot for the Markovite Ukase just the fact ptivate a radical Shallyan faction when it sounds like an eastern european secret police force.

Poor Extremely well used and has major flaws, which may be too numerous to mention. I would love to see your play reports and if you can keep track of conversion notes etc. Want to add to the discussion?